HOW TO REACH RIMINI

HOW TO MOVE AROUND RIMINI

The Expo Centre is located in Via Emilia 155 in Rimini and is linked with the motorway network via the A14 Adriatic motorway Bologna - Bari - Taranto (www.autostrade.it).
Exit: Rimini Sud (7 km) - Rimini Nord (6 km), calculate the best route to reach the Expo Centre.

"Rimini Fiera" station on the line Lecce - Milan / Milan - Taranto line connects travellers with the main lines easily and rapidly. During major exhibitions several trains bring visitors to 50 metres from the expo entrance from all over Italy, Rimini and the coast.
For travellers alighting at Rimini´s main station, the bus for the expo centre is N° 9.

Station assistance service
RFI provides passengers with disabilities and reduced mobility (PRMs) with an assistance service at “RiminiFiera" station.
Detailed information on the service, which must be booked with at least 12 hours notice, is available on the RFI website under section "Station Accessibility".
The service is available exclusively for assistance when boarding and alighting trains and does not include accompaniment inside the exhibition centre.
The meeting point at the Exhibition Centre is at the ticket office of RiminiFiera station.

The expo centre also has a helicopter landing area, for information: "paolo.giovanardi@iegexpo.it"

Metromare is the new public transport system connecting Rimini and Riccione railway stations in 25 minutes, on a dedicated lane away from urban traffic. Just like an over-ground metro, the line stops at 15 intermediate stations with frequent and reliable rides.
Thanks to public transport connections from Rimini station to Rimini Fiera station, you can choose to leave your car at the hotel, avoid the traffic and help reducing environmental pollution.

To use Metromare and local public transport You need a valid ticket. 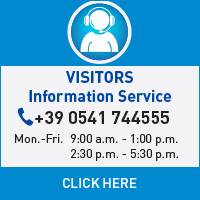